Fellow Evernote ambassador, Lindsey Holmes mentioned a service called EverAction[Tags] that allows you to post to your WordPress blog from Evernote simply by adding a certain tag to a note. I’ve been hoping for a service like this for awhile, now, so I thought I’d try it out.
Note: This was originally just going to be for testing, but I decided to actually post it. It’s unpolished, and a little all-over-the-place, but I enjoy reading about others’ experiences with new software and services, so I’m hoping it’ll help someone else who has been looking for an easy way to integrate Evernote and WordPress.
EverAction[Tags] does a great job of creating a table of contents note in a notebook, so I’m hoping it does just as well with the WordPress posting. Before I write any more, I think I’ll post this as a draft.
See you on the other side… (hopefully)

Interesting. That last test did post as a draft on my WordPress blog, but the formatting was kind of strange. Definitely not a deal breaker, but worth noting. Now lets test pictures…

If everything goes as hoped, you should see a picture of my puppy in the space above. Hell, I’d be happy if it showed up anywhere on the page. So, let’s try this out again. Once EATags processes a note, it changes the trigger tag to something else. So, to post to WordPress, I tag a note: eat.wordpress.draft (or eat.wordpress.post). Once it’s been processed, the tag is changed to “eaten: [wordpress.draft]”. Pretty cool.

Interesting to note that it seems to handle updating a post really well. Instead of creating a new post when I changed the tag back to eat.wordpress.draft, it just updated the existing post. Obviously, this is the preferred behavior, so it’s nice to see it working that way.
The formatting is still wonky. Lots of extra divs. Like every blank line gets its own div and br tags, but actual paragraphs don’t get any tags. I’m sure there’s a purpose to that, but I can’t figure out what it is. This tagging of single lines also breaks the Markdown tags, since it indents the lines. (See the header tag in the image below.) In this test, I’m removing the markup, and just formatting the note in Evernote to see if that works better. 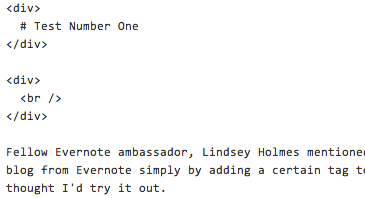 The pictures came through inline, which is cool, but the JPG seems to have been converted to PNG. Definitely not the preferred file format for a photo, but it’s minor enough not to be a deal breaker. Just something to keep in mind.
So far, I think I like it. Looks like they’re new to DevCup this year (my DevCup post will be coming soon, I promise,) and so far I think they’ve got my vote for the WordPress integration.
I think EverAction[Tags] has something good brewing here, and I can only see it getting better. I really like the entire concept of using tags to perform actions on a note. It’s something that I don’t see enough of in third-party integration with Evernote.
Of course, EATags (I’m not sure exactly what the short version of their name is… EAT?) does other things well, too. The table of contents feature is cool. You can create a TOC for a single note, or an entire notebook. Also, you can tweet from Evernote. I haven’t tested that feature yet, but I can see where it might be useful.
For those of you who don’t want to scroll back up to grab the link to EverAction[Tags], here it is. Enjoy, and let me know what you think in the comments.

Decided it was possible that the Markdown plugin might have been causing the formatting issues, so this last bit of text is basically just to test that theory. I disabled the plugin. Here goes nothing…
Guess that wasn’t it. I’ll keep testing and post the results later.